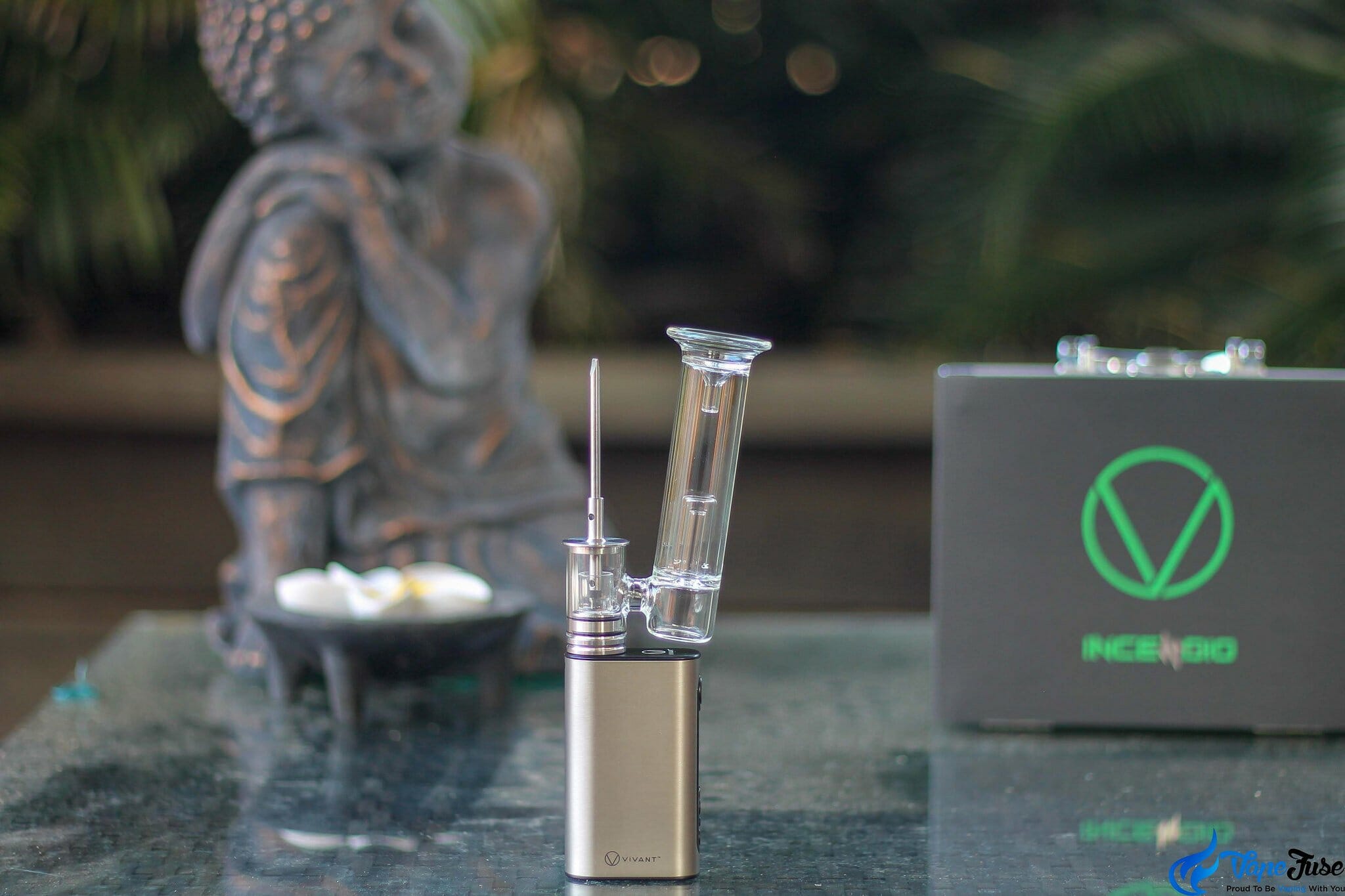 Wax vapes, disposable dab pens, eNails, concentrate vaporizers. The future of vaping really is upon us! This week we’ve got an all new dual dab pen/eRig to break down; the Vivant Incendio!

Vivant Technology has been making vaporizers for a while now, first coming onto the radar with the Vivant Alternate Portable Vape for dry herb.

Their new Incendio line of concentrate vapes marked their first step into the premium wax vape market amongst the likes of Dr. Dabber, , and even .

The Vivant Incendio is available both as a solo dab pen and a hybrid dab pen/eNail setup, which is referred to as the Incendio Kit.

Aside from offering protection to the glass parts within, the sturdy kit is easy on the eyes and is remarkably discreet due to its similarity to a poker kit or piece of photography equipment.

With a bottom length of just 8″ (20 cm) and width of 3″ (8 cm) the Incendio Kit is remarkably compact, making it the perfect companion for a day of on-the-go dabbing!

Looking more like something out of a James Bond movie than a vape, the Vivant Incendio’s hard-shelled aluminium case is fitted with precision-cut foam to ensure that all of the interior items are well protected.

The main components; the 5000mAh mod battery, the fitted glass aqua bubbler, and the main incendio tank for the dab pen, take pride of place in the Incendio’s full kit.

When travelling you can even load up to a gram or two of your favorite concentrate into the included silicon dab container so that you have everything you need to dab in one place!

The Vivant Incendio on its own is an impressive device. Its ultra-powerful lithium-ion battery is capable of producing massive clouds of vapor in seconds.

If you’re looking to take your vape out and about and don’t want to have to lug the whole kit around with you, this patented Vivant Incendio tank is the perfect way to consume your concentrate quickly and discreetly.

Vivant’s branded mod vape battery is hardly larger than an old Nokia phone and is easily compact enough to be concealed in any small bag or pocket.

The Vivant Incendio Tank features dual airflow slits to maximize the size of the toke you can take, as well as having an easy-clean removable filter which helps to simplify maintenance.

If you’re a fan of disposable dab pens or have ever wanted to try and whip up your own DIY cannabis-infused eJuice, the Incendio’s battery features a 510-thread connection!

This 510-thread is compatible with almost all mod tanks and dab cartridges, meaning you can enjoy your favorite eJuice or liquefied dabs directly through your Vivant Incendio.

If you’re looking to hit some low key dabs on the go, load up a small amount of wax (like 0.1 g) and spread it evenly over the surface of the quartz cup.

When you’ve reattached the Incendio tank a push of the button should get you some huge dabs. They say that vaping delivers a different type of high, and that’s never been truer than when vaping concentrates

We’ve had a few people weigh in on how many watts the chamber should be set at to deliver the best hits, but that is really dependent on the way you like to dab your concentrates.

The 5000mAh mod vape battery has a variable wattage of 0-40, meaning that you have an ultra-broad temperature spectrum to play around with.

For 510-thread dab cartridges, I recommend starting around the 3/4 mark as the contents is super viscous. If you’re using the Vivant Incendio tank, it’s recommended to start your session off at between 8 and 15 watts.

The device is super straightforward to operate. With the large button at the top you can turn the device on and off with five clicks, and once you’ve set the temp, you can use it to heat the atomizer.

With the bottom three buttons you can use the outer two to switch between the variable voltage, with the button in the center being used to alternate between dab pen and eNail mode.

Turning your Vivant Incendio box mod into an eNail is as simple as removing the mouthpiece from the Incendio and attaching the pre-filled glass aqua bubbler.

Using the aqua bubbler is definitely more of an at-home type of thing, but it’s definitely worth giving it a try as the experience improved tenfold.

eRigs and eNails are a relatively new concept that stem from traditional dabbing methods such as bangers and nails, and even hot knives!

Concentrate connoisseurs have always understood the benefits of water filtration when it comes to cooling their waxy vapor, thus spawning the concept of an eNail/eRig.

You can switch the Vivant Incendio’s 5000mAh box mod battery from dab pen to eNail mode by simply holding the small button between the temperature buttons.

It’s generally better if you start at a lower temperature as you can really get the most out of your concentrate’s terpenes.

We’ll be releasing a video review of the Vivant Incendio kit in the coming days so if you want to see what this thing blows like, keep an eye on this space!

Included in the Vivant Incendio Kit is:

Want to see more articles like this? Why not check out our Best Wax Vapes 2018 Buying Guide or the rest of the Concentrate Review section?

Since the writing of this review, Vivant has introduced the VLeaF Go, you can check out our review here.