Over the last year, vaping has been the subject of a great deal of controversy, thanks in large part to a spate of illness and death attributed to the habit. Although the jury is still out whether vaping was directly related to these incidents. The simple fact that they made headlines has some people asking whether vaping marijuana is actually more dangerous than smoking.

The answer isn’t as simple as it might appear. In truth, the only thing that most doctors can agree on is that when it comes to lung health, the safest choice is to avoid both vaping and smoking.

However, when you want to experience the benefits of marijuana, that’s not the most practical solution. With that in mind, there’s some evidence that vaping is actually the safer option for using marijuana.

Smoking vs. Vaping Marijuana and Your Lungs

As the name implies, smoking marijuana involves burning the plant and inhaling the smoke, which delivers the cannabinoids. Vaping, on the other hand, creates a vapor using heat, which is breathed in to create the “high”.

In general, vaping marijuana is considered less harmful than smoking for several reasons. First, smoking any substance creates toxic chemicals that are linked to cancer, as well as tar and ammonia.

That said, doctors note that smoking marijuana is less likely to lead to pulmonary illness, including cancer, than smoking cigarettes because it contains fewer of these carcinogens and does less damage to the airways.

That’s not to say that vaping is without risk, as some vape pens contain substances that have been linked to cancer. However, in general, vaping marijuana is less likely to lead to illnesses like bronchitis or respiratory infections than smoking.

Doctors note that the benefits of vaping, including a decrease in coughing, phlegm production, and chest tightness, are less likely to occur among those who vape, and that the benefits only increase as you continue to choose vaping over smoking.

How Vaping Changes Your Marijuana Consumption

It’s not only your lungs that can benefit from vaping over smoking. The entire experience of using marijuana can be improved with a vape pen or vaporizer.

People who vape note that vaping is preferable to smoking because it tastes better and does not create the smell that some find unpleasant. Perhaps more importantly, though, is evidence that vaping weed can get you higher than smoking.

A study at Johns Hopkins found compared participants’ high after vaping or smoking different doses of marijuana, and found that those who vaped had were significantly more impaired and had a greater likelihood of experiencing negative effects (such as anxiety, paranoia, and vomiting) compared to those who smoked.

In fact, the profound difference between vaping and smoking has led many experts to warn users about being cautious with their dosage if they choose to vape to prevent unwanted effects.

This is in large part due to the amount of THC that’s converted into an inhalant. Vapor converts almost 50 percent of the THC, whereas combustion only converts about 26 percent. In other words, there’s almost twice as much THC in the vapor, which can produce a stronger, longer-lasting high.

And as a side note, this also makes vaping more affordable. Although a vaping cartridge for instance at an Arkansas marijuana dispensary is more expensive than a similar ounce of marijuana, it lasts much longer and allows you to use less in each session.

Vaping also affects the experience of using cannabis by making users more mindful. Using a vaporizing device requires you to be more mindful about your breath. Mindful breathing is actually a cornerstone of meditation and relaxation.

Those who choose to vape note that they get more enjoyment and positive benefits from their cannabis use because of the mindfulness required to do it successfully. 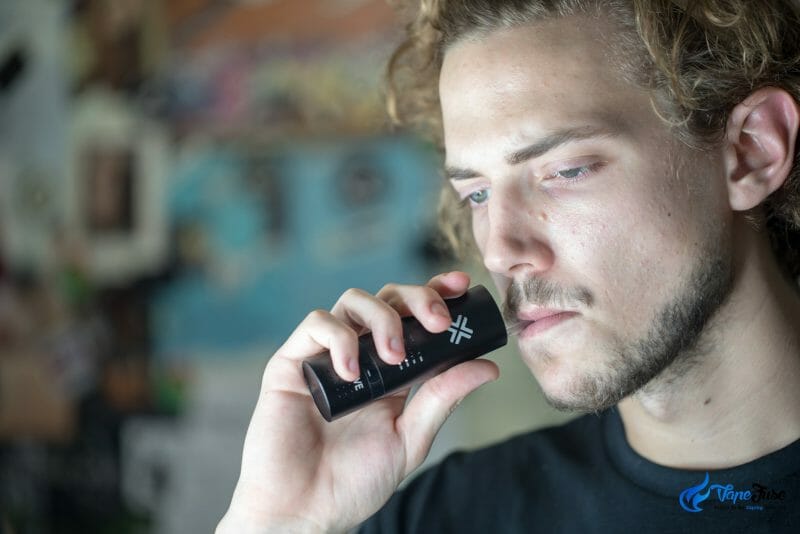 Novice users also tend to find vaping easier to manage. They don’t need to inhale smoke into their lungs, which can be irritating, especially to non-smokers.

If vaping is the safer option, though, it begs the question of why so many health experts and government leaders are so concerned about the habit.

The answer comes down to how the product is used, and where it comes from. There’s evidence that the individuals who were sickened after vaping marijuana used tainted products, purchased on the black market.

Incorrect vaping, and not knowing exactly what you are using and the potential effects can increase the risk of a bad outcome.

Therefore, it’s important to do your research and only purchase and use vape products from reputable sources. Take care to ensure you’re using cannabis as safely as possible, and vaping can be a pleasant and beneficial experience.

If you are drawn towards growing your own cannabis plants and you live in a state or country where you are allowed to do so legally, then it is essential to choose quality seeds or an easy to grow feminized cannabis strain to start your growing journey.