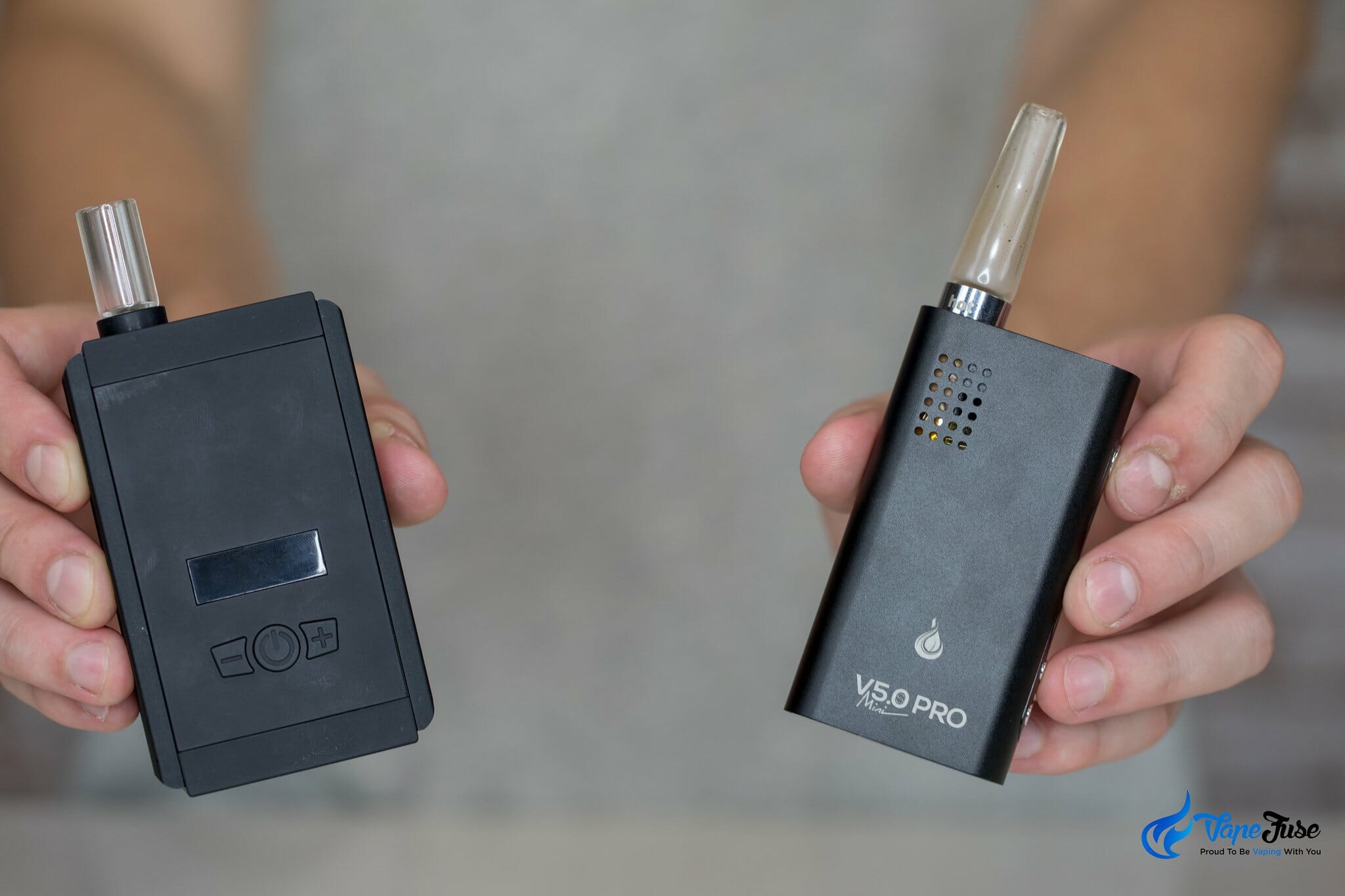 I recently introduced you guys to the TopBond line of portable vaporizers, which includes the Novae, the Torch, and my personal favorite, the TopBond Odin!

The Odin stood out to me due to its resemblance to another personal favorite of mine, the Flowermate V5.OS PRO Mini.

Both devices are premium portables that are capable of producing some amazing clouds of vapor. The vapor path is almost identical, with the Flowermate’s flavor profile only just beating out that of the Odin. 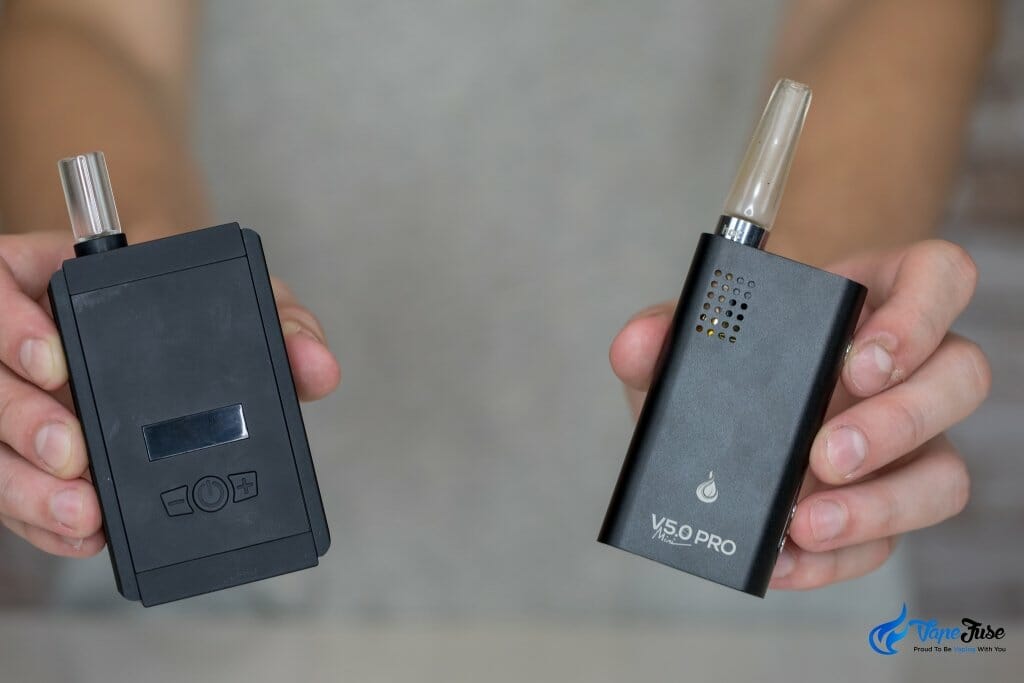 In terms of functionality, the Flowermate has a number of additional features that help to enhance the user experience. The Odin is, however, more durable and better suited to outdoor use.

If you’re on the lookout for a new portable vaporizer, or simply interested in finding out about some cool vapes, this is an article for you! 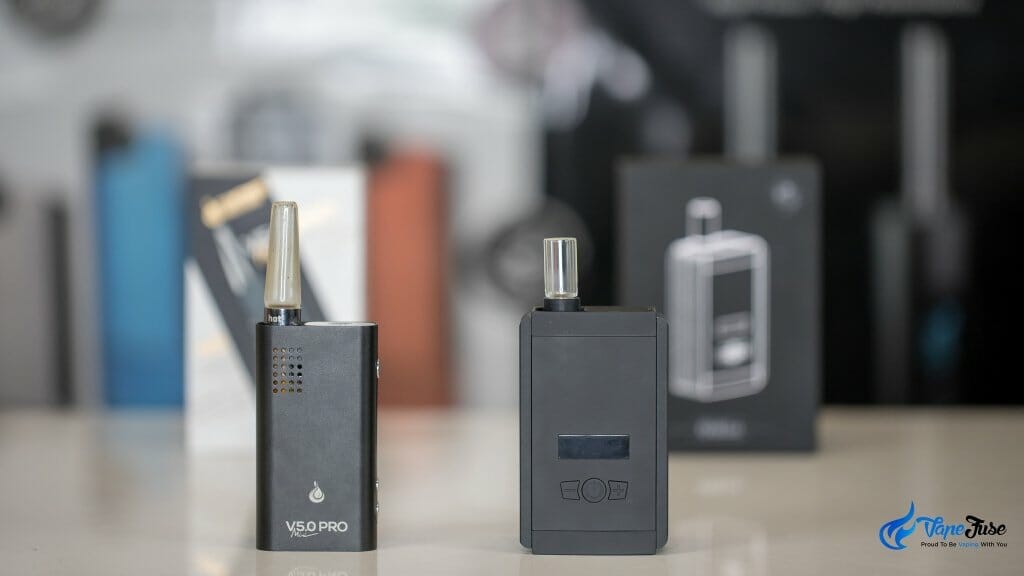 What the TopBond Odin lacks in relative discreetness, it more than makes up for in versatility. It’s a durable little portable with fantastic battery life and a great airflow.

It’s resemblance to the Flowermate V5.OS PRO Mini isn’t only at an exterior level, the interior makeup of these two vaporizers is actually very similar. 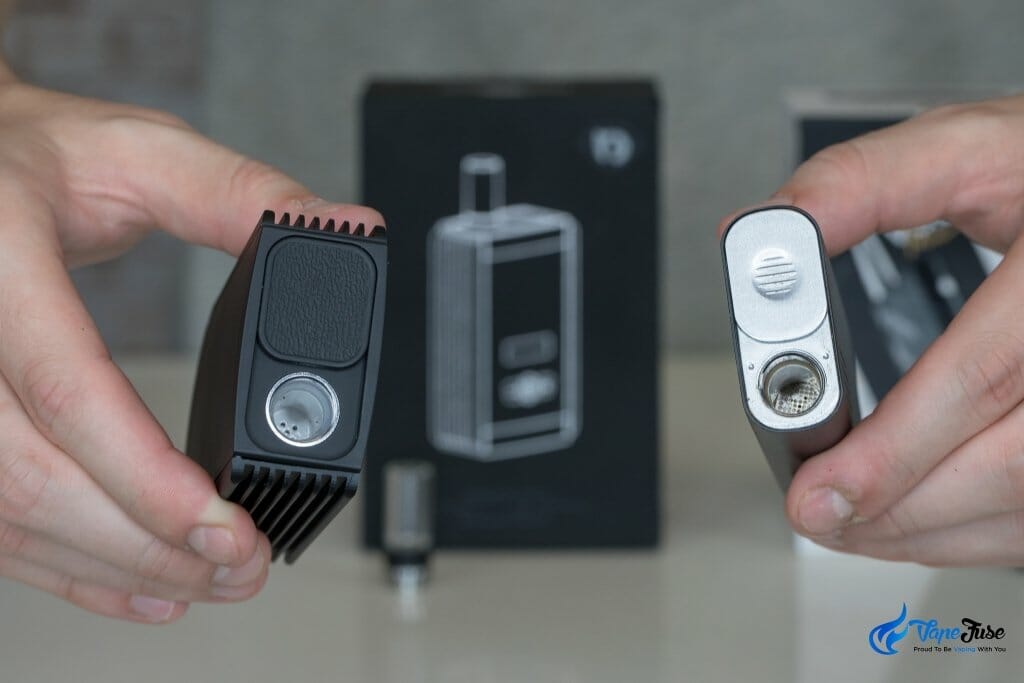 Both the TopBond Odin and FlowermateV5.OS PRO Mini comes equipped with embedded ceramic baking chambers. The Flowermate’s is a bit narrower, which in my opinion creates a more refined flavor.

The wider-set chamber on the Odin is awesome for generating clouds, but the somewhat uneven vaporization method can result in a little harsher vapor when you’re nearing the end of the session.

A decent vapor path is fundamental when you’re looking at blowing tasty clouds, and the Odin and Flowermate’s ceramic baking chamber and borosilicate mouthpiece create some really fantastic vapor. 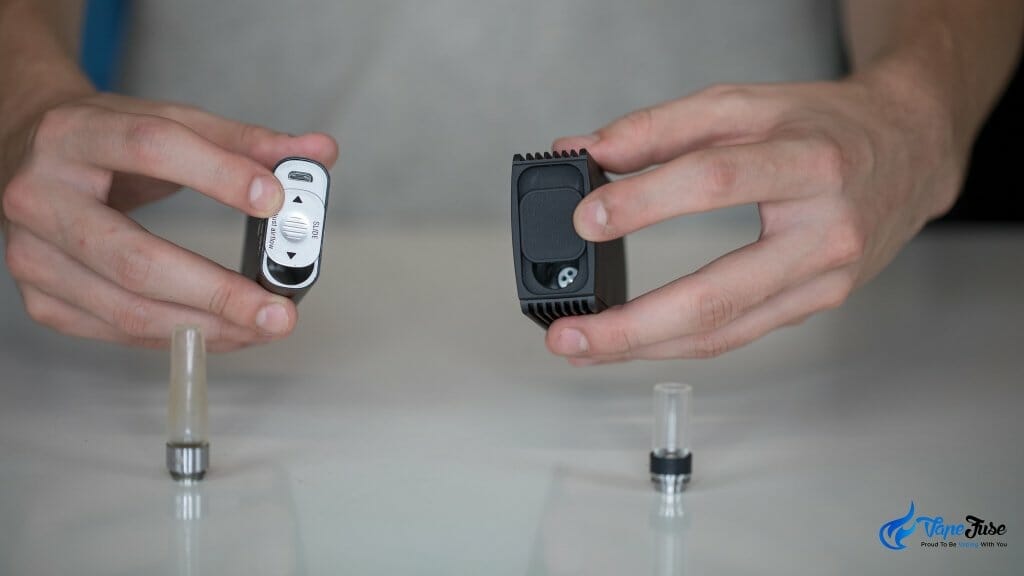 Another feature that I admire in the two is the adjustable airflow catch on the bottom of the device. It’s a bit more noticeable with the TopBond Odin due to its wide-set mouthpiece, however, the Flowermate is still able to be toked with ease compared to some other vapes.

Cleaning and maintaining your screens and mouthpiece can be a big help in increasing airflow as it’s quite common for resin to build up on the inside of the vape. 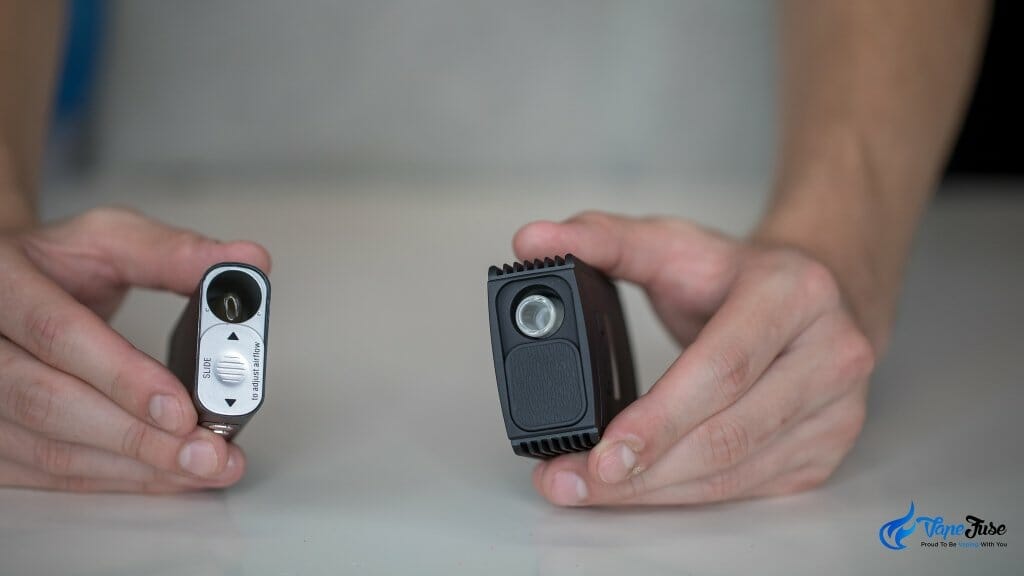 A handy little extra, the airflow catch slides fully open to reveal the underside of the chamber. This little pocket can be used to store your mouthpiece when out and about.

This helps to preserve the life of the device and save the mouthpiece from smashing in your pocket. It also makes cleaning the device an ease as you can literally scrub the underside of the chamber. 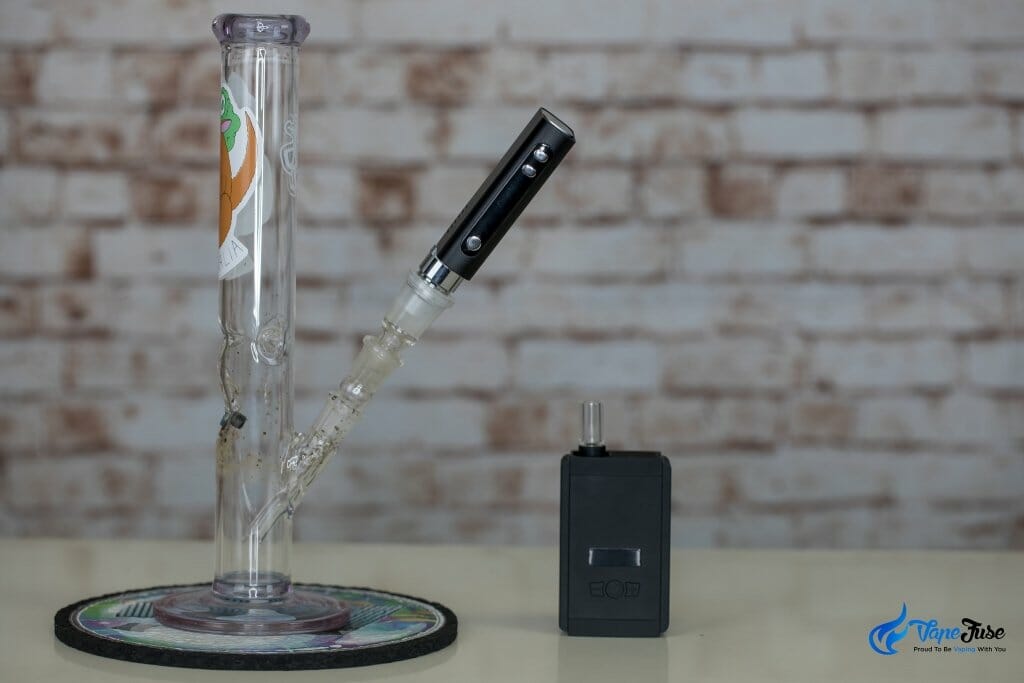 The Flowermate V5.OS PRO Mini’s functionality is second to none, with the ability to vaporize a number of substances, like herb, liquid, and wax, in a bunch of different ways.

With the included 14mm/18mm universal water pipe adapter, you can hit your vape through your favorite glass piece. This helps to cool the vapor and greatly improves your vaping experience.

Continuing down the line of super functionality, the Flowermate’s power-bank function is a totally innovative, totally discreet little function that perfectly conceals the devices true intentions.

Simply plug your smartphone, camera, or even your other vape’s cable into the USB port on the side of the device and harness the charging power! 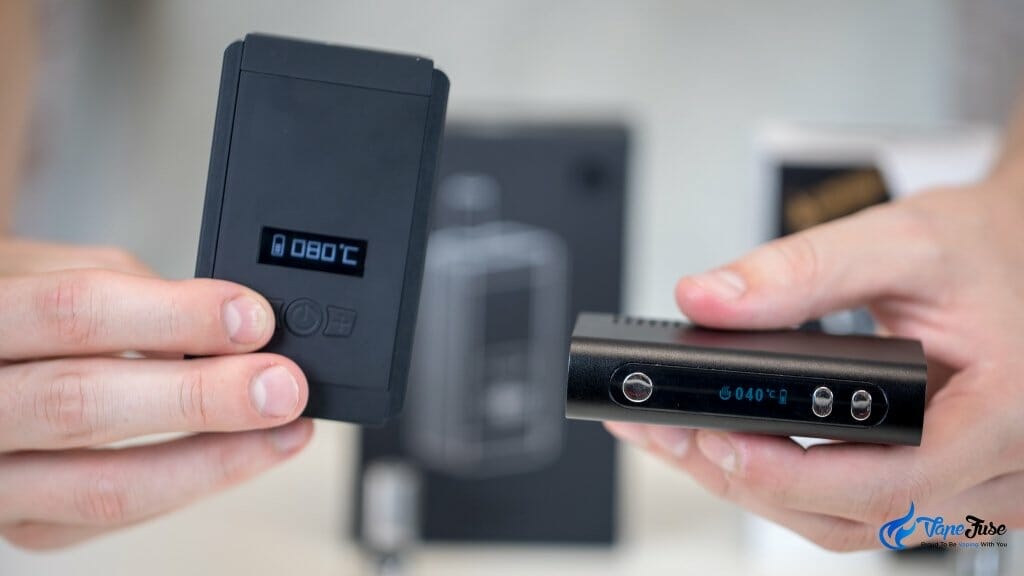 The digital display is largely the same. Both displays show the current temp and battery life indicator, while the Flowermate’s also indicates when the device has reached its desired temp with a tiny symbol.

The TopBond Odin also has a desired temp indicator. When your temp is reached it vibrates like an old Nokia to let you know that it’s ready to toke!

The Flowermate’s ultra-low temp allows you to get the plant’s full terp profile, while the Odin starts its range a little higher at 80°C (176°F). 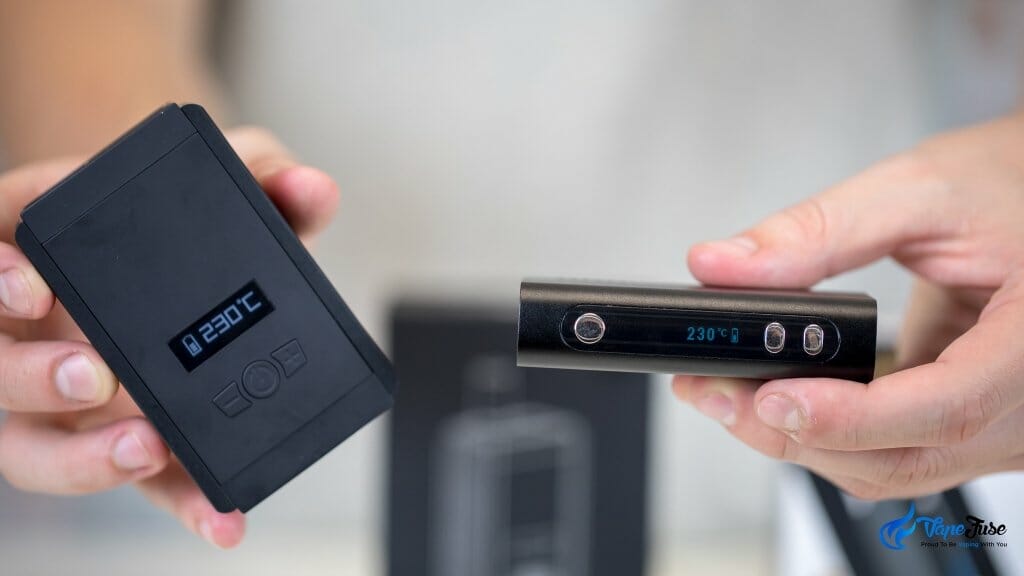 If you’re looking to get the most out of your herb blend, both the TopBond Odin and the Flowermate V5.OS PRO Mini crank up to 230°C (445°F).

The ultra-high temp allows for massive hits of vapor, however, it’s best to begin your session low to get the full effect. 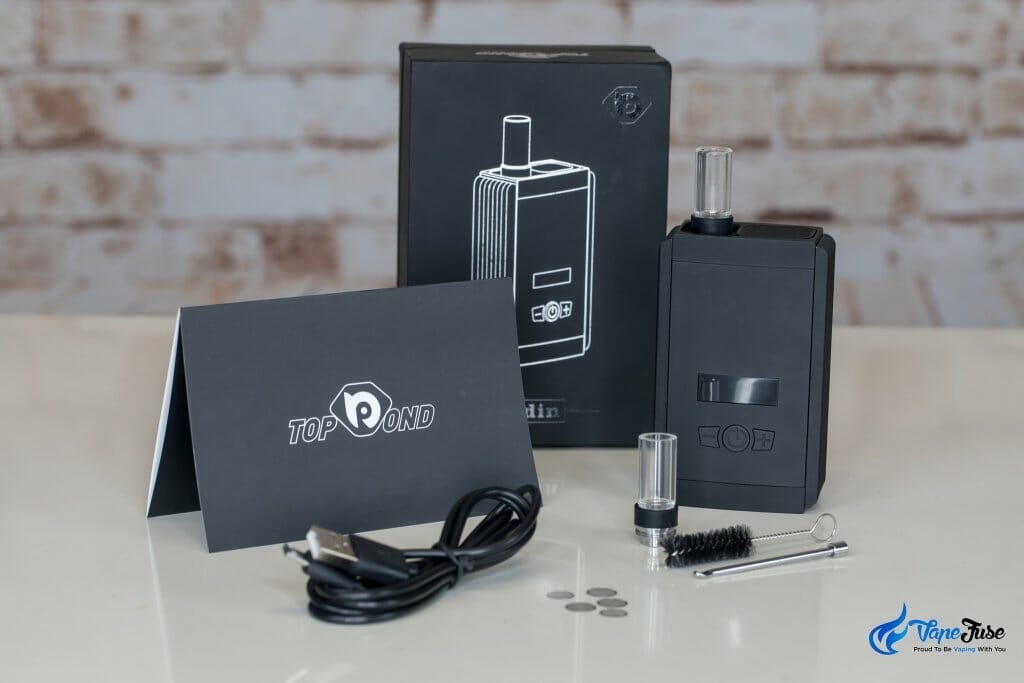 I was quite surprised how much I liked the TopBond Odin.

The wide-set mouthpiece was actually an improvement on the Flowermate’s, and the super-simple method of operation makes this a perfect vape for anyone.

If you’re a smoker that’s looking to give vaping a try or are looking for a handy little portable to go alongside your desktop, check out the TopBond Odin! It’s an affordable little powerhouse with fantastic vapor production.

Included in the TopBond Odin’s Kit: 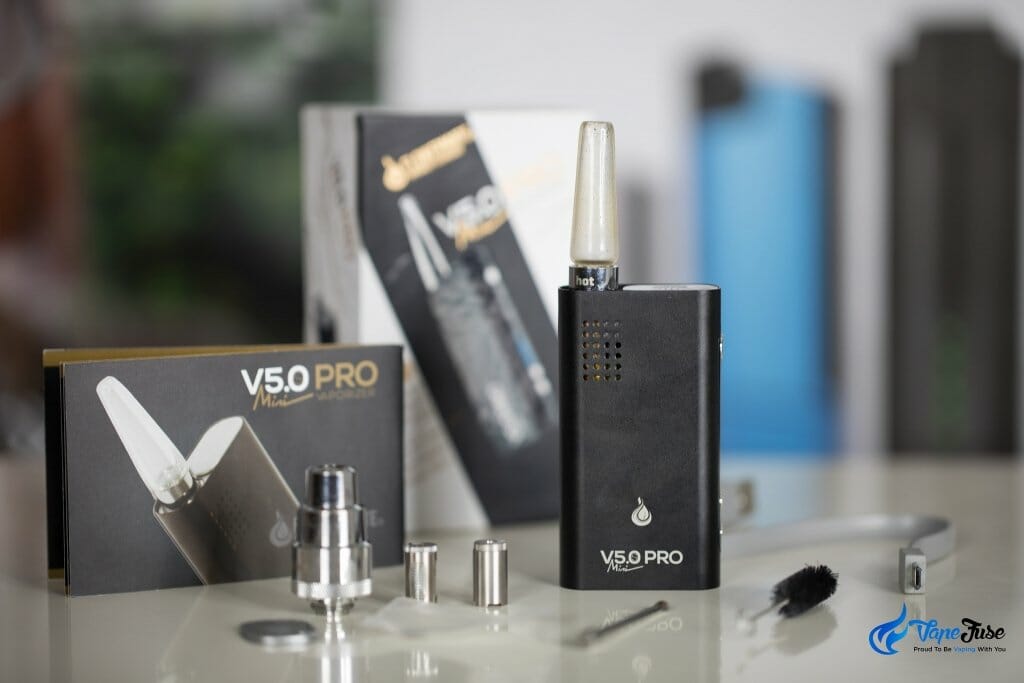 The Flowermate V5.OS PRO Mini is a classic device and still a hearty competitor to this day even after being on the market for a number of years.

Aside from the Storz & Bickel or Arizer line of portables, I’m yet to find a device with a flavor profile this good. While not as economical as say the Arizer ArGo, it generates huge clouds of immaculate tasting vapor and provides maximum discreetness.

If you’re in the market for a premium portable to take to music festivals or movie theatres, check out the Flowermate line of vapes in the VapeFuse online store! 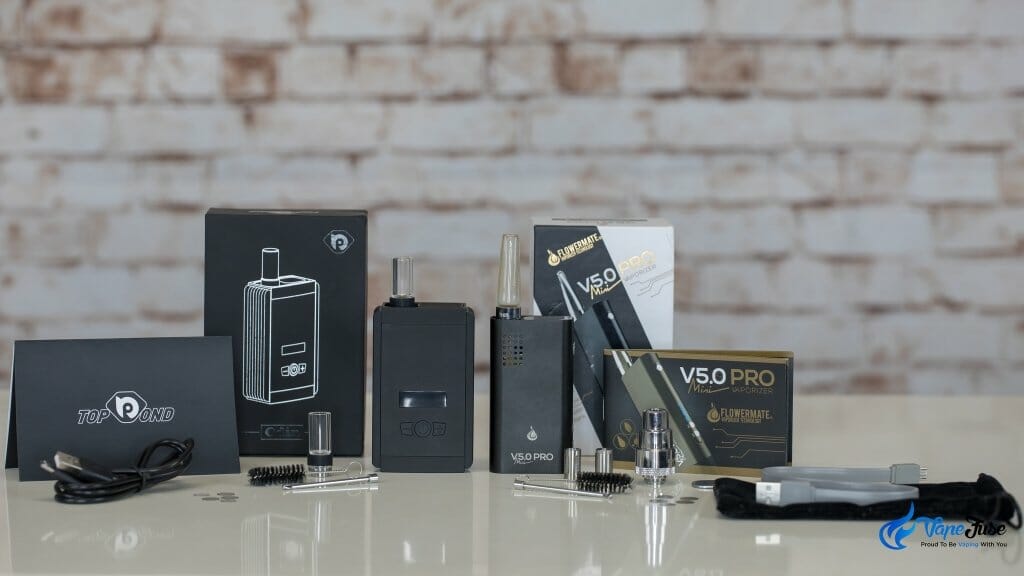 Whether you’re looking to give vaping a try and want a good starting portable, or simply looking for an upgrade from your existing portable vaporizer, the TopBond Odin and Flowermate V5.OS PRO Mini are the devices for you!

If you’re a little more price sensitive and flavor is less of a factor, the TopBond Odin is the perfect vape for you! If you’re a flavor fiend like me, or simply in need of a new power-bank, the Flowermate is going to be your new best friend.

Check out our huge range of portable vaporizers in the VapeFuse online store!