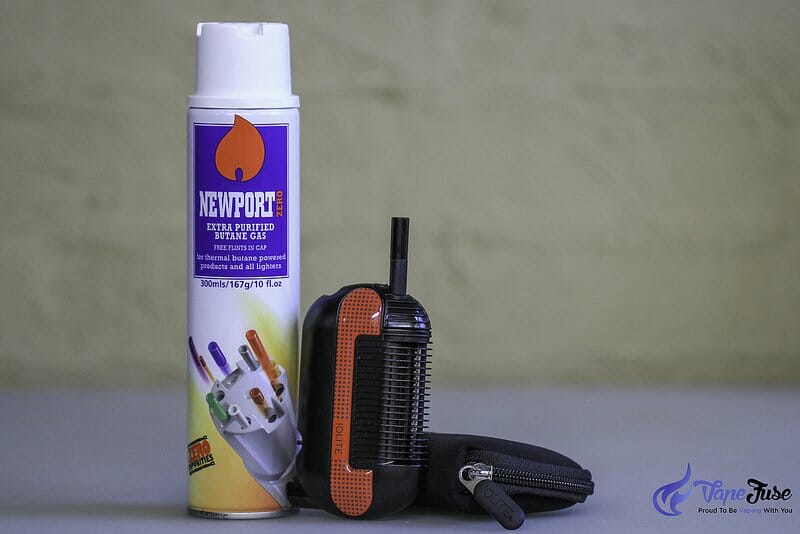 While using a manual vape may seem like an arduous task to some, for many of us, not having the restrictions that a battery brings is an awesome feature!

If you’re a portable vaping fanatic that loves taking their prized portable with them everywhere, having a manual vape means that you’ll never have to worry about your battery running out again.

We’ve probably all been in the situation where we’ve rolled up on the spot with the loud, the papers, the filter, damn, even a grinder! And some damn fool decides to forget the lighter. It’s a problem in the vaping world too!

There’s nothing worse than when you have your heart set on a session to turn your vaporizer and see the battery level at a critical low.

Now, I know that most vapes feature pass-through charging, but a true portable vaping fanatic doesn’t wanna know about no charger, hombre.

To begin I should probably start by explaining what a manual vape is, right? Above is the Arizer Solo II (left) and the OG Arizer Solo (right) while they are both amazing devices, neither of them a manual vape.

Why did I include this picture then? Because there seems to be a big disparity between digital vapes, analog vapes (like the OG Arizer Solo above), and manual vaporizers.

The Arizer Solo II is a digital vape, the OG Solo doesn’t feature digital temperature control, and instead has a number of pre-programmed temperature settings, lumping it into the analog vape category.

For this post I’m going to compare two of best and most popular manual vaporizers; the Iolite Original Portable Vape and the DynaVap M 2018 Edition!

Aside from traditional glass vaporizers that were more like a crack pipe than a herb vape, the Iolite Original Portable Vaporizer from Irish vaporizer veterans Oglesby & Butler was the first known manual vape to hit the market.

The Iolite Original Portable Vape first hit markets back in 2008 to mass-acclaim. & Butler are actually camping supply manufacturers who thought they’d try their luck with vape! And they killed it.

With a large internal butane tank and economic-burner, you can get up to two hours of non-stop vaping time off of a single tank of gas!

The Iolite Original’s internal thermostat helps to keep the oven at a consistent atomizing temp of 190°C (375°F).

To fill the Iolite Portable Vape, you have to invert the device and insert the end of a pure butane gas can while pressing in for up to 30 seconds.

When the Iolite’s internal gas tank is full it will emit a tiny burst of liquid gas, indicating that you should remove the gas can’s adapter and set the device down for a few minutes to rest.

While there is very little chance that you would damage the device if you use it immediately after filling, I always find that it’s good practice to leave it for a few minutes to settle so that the gas can become used to its new pressurized atmosphere.

The Iolite Original Portable Vape has a chamber that’s constructed from brass and aluminum, substances that are known to generate some of the tastiest herb vapor around!

Both the Storz & Bickel Crafty & Mighty have aluminum baking chambers, while the PUFFIT X utilizes brass. All three of these vaporizers are widely around for their exquisite flavor and dense vapor.

While the vapor produced is quite light, and not necessarily very dense, the flavor is there in spades, making this the perfect device for a herb connoisseur.

Activating the Iolite Original’s internal burner is as simple as flicking a light switch. Simply move the food-grade plastic dial from 0 to 1 and wait for the red light to flicker.

You will hear a faint ‘whooshing’ noise as the device’s chamber heats up, and as soon as the internal thermostat has realized that the doesn’t is at the correct temperature for atomization, the sound will subside.

Every few tokes or so the Iolite Original Vape will click back into heating mode to regulate the temperature of the chamber within.

This means that you are free to leave your device running for extremely long periods without having to worry about the herb inside becoming charred as it will only heat the chamber when needed.

The Iolite Original Gas-Powered Portable Vape has stood the test of time and sells will still to this day. It offers fantastic flavor, next-level portability, and total discreetness.

It comes equipped with a fantastic nostalgic kit that is reminiscent of its camping-supply-store heritage!

Included in the Iolite Original Kit is:

One of 2018’s hottest new-release vapes is the updated DynaVap “M” Manual Vape. Hot off the hype of their 2017 release, DynaVap USA is right back at it with this new and improved vaping powerhouse!

READ RELATED STORY
VapCap Review: Which DynaVap is For You?

The DynaVap M Portable Vaporizer is the budget, entry-level model in DynaVap USA’s line of unique portable vapes, with a jaw-droppingly low price that is beyond good value.

Some vaporizers, now I’m not naming names, give you stuff all vapor and a crappy flavor for $250. The DynaVap is roughly a quarter of the cost of some of these portables and is about as good as it gets in terms of both flavor and density!

Unlike the Iolite Orignal Portable Vape, the DynaVap M’s chamber and almost all of its body are constructed from stainless steel.

The DynaVap M, pictured above left, has a pretty unique chamber screen that helps to limit herb particles from entering the vapor path.

Pictured left is the DynaVap NonaVong-S,  which is a more upmarket version with a wooden body and titanium chamber.

Titanium is better at retaining heat and delivers a cleaner vapor, but it is comparatively expensive, pushing the price of the NonaVong-S over $100.

When packing your DynaVap’s chamber you can use either whole herb or ground herb, but we definitely recommend using a grinder to break the herb down as it will generate more vapor.

The metal VapCap, pictured just right of the DynaVap’s packed chamber, acts as a sort of thermostat for your devices chamber.

Once the cap has been placed over the chamber and heated to a certain extent, it will click once or twice to let you know that your vape is ready to use!

Heating the DynaVap M is as simple as holding the vape at a 45-degree angle and hitting it with the very end of the light blue flame that your jet lighter produces.

There are a bunch of different tips and tricks that can be used to get more flavor or a denser cloud of vapor, this is definitely a vape that takes a little getting used to, but once you’re there you’ll never want to put it down.

A full video guide on how to expertly heat and use the DynaVap M 2018 Portable Vape can be found below:

Using a DynaVap in public is only really possible when you’re free from judging eyes, as the chamber up does appear to look a little nefarious, especially in those cities where pipe-use is pretty prominent.

So what do you think, could you ever come around to using a manual vape? The technology continues to improve, with a new DynaVap set to hopefully release at the start of each year!

If you’ve got any stories about using a manual vape or have any suggestions about other manual vaporizers that I should review, drop me a comment below and start the !