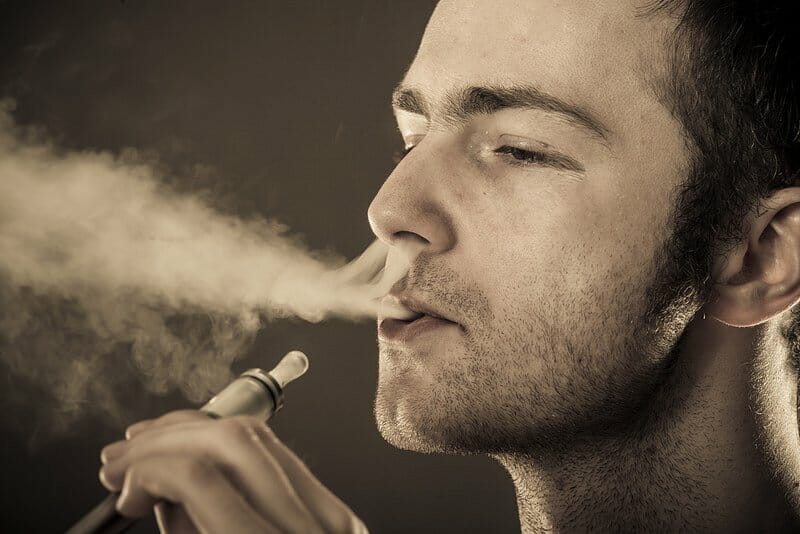 The Good, The Bad, and The Wrong

A lot of information out there about vaporizing and electronic cigarettes are cropping up. But how much of these are true? How many headlines are actually misleading? Because of this, VapeFuse decided to take a closer look at all the studies out there and compiled a list of eye opening, informative facts for vapers and non-vapers.

In the media, you’ll often hear the term e-cigarette used to describe personal portable vaporizers. While they have similarities they are truly different products.

E-Cigarettes – these look like a standard tobacco cigarette and the unit is one solid piece. Usually only a one time use with the battery lasting a couple hundred to a thousand puffs. Available in a variety of flavouring with or without nicotine.

Dry Herb Vape Pens – are exactly like e-liquid vape pens, except that the chamber usually contains some type of hot-plate or bowl for dry herbs and extracts. 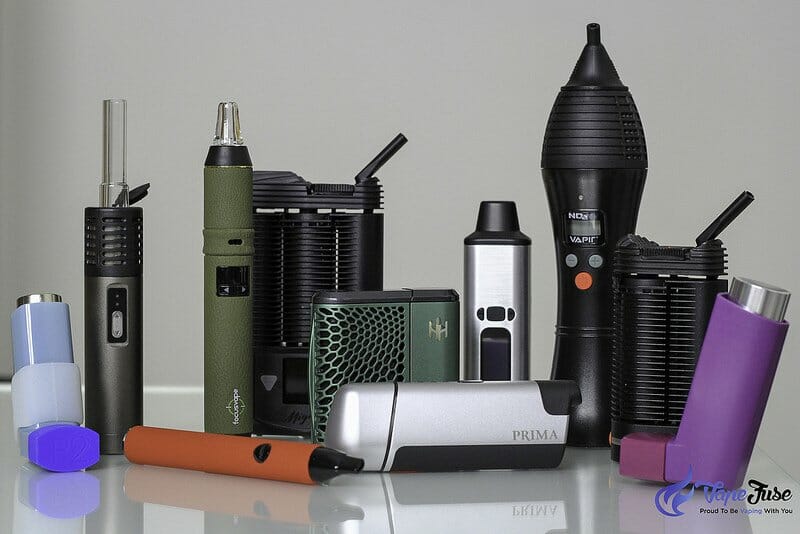 Some devices can support both liquids and herbal materials, sometimes even waxes!

15. A Large Majority of Vapers Do Not Use Nicotines

While clinical studies regarding this issue are currently not present, research done by VapeFuse concluded that 7 out of 10 former smokers have cut down their nicotine requirements to zero ml, while non-smokers choose zero ml nicotine to start of.

Why are e-cigarettes so successful in helping people quit smoking? It’s because smokers can gradually wean themselves off nicotine. A smoker can slowly lower the nicotine content with each new purchase of e-liquid. For example, users would start 12 ml the first bottle, 10 ml the second bottle, 6 ml the third bottle and finally 0 ml for all bottles after that.

14. No One Supports Minors To Use Vaping or E-Cig Products

A misconception is going on that vapers and the vaping industry are encouraging minors to use their products.

That is just a rumour that started via the internet. Not a single vaping or e-cigarette company supports minors using their products. And the same can be said for the average vaper. Not to mention, numerous countries have laws prohibiting the sale of vaping and e-cigarette products or any related products to minors. 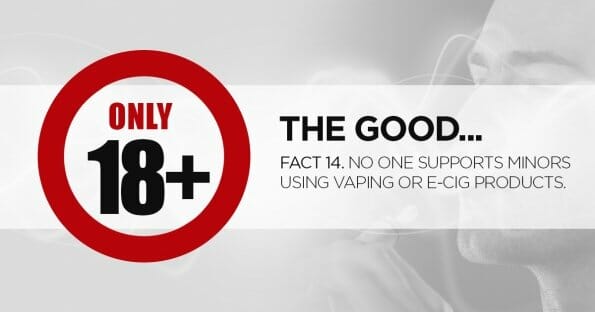 13. Dry Herbs Are Not The Same As Tobacco

Unlike tobacco, all other dry herbs have at least one medicinal purpose that humans have been using for thousands of years. For example we use lavender for relaxation or as antidepressant, chamomile as a sleep aide, lemon balm for pain relief, dandelion for weight loss, and peppermint for energy. All of which can be safely vaped. 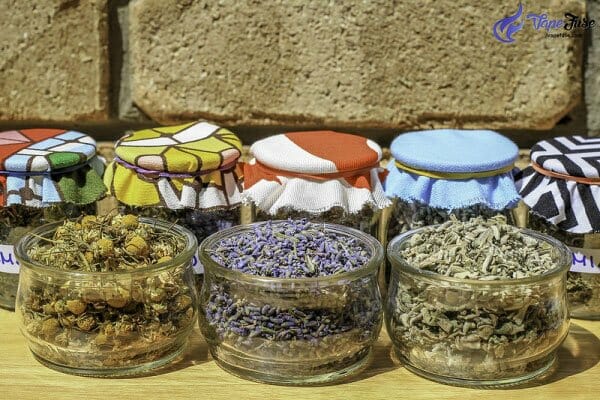 12. E-Cigarettes and Vaporizing Are Not Gateways to Drugs & Tobacco

In spite of a popular claim by non-health professionals, the use of vaporizers or e-cigarettes don’t increase or lead to tobacco or nicotine use. There is more evidence to support the exact opposite. E-cigarettes and vaporizing are more likely to make tobacco smoking a habit of the past.

Dr. Ted Wagener did a study using 1,300 college students regarding the impact of e-cigarette use. His research with the University of Oklahoma Health Science Center found that only 1 out of 1,300 whose first experience with nicotine was via e-cig later took to using tobacco cigarettes. Thus, concluding e-cigarettes are not likely to increase one’s probability for tobacco use.

Keep in mind this study was done using e-liquids which contained nicotine. Dry herbs that are not tobacco and e-liquids that contain zero nicotine have even less of a risk for increasing one’s probability of tobacco use at all.

10. Despite Popular Misinformation a Number of Studies Regarding Vaporizing & E-Cigs Have Been Done

Here are some honorable quotes from studies done:

The Royal College of Physicians in London has stated “On the basis of available evidence, the RCP believes that e-cigarettes could lead to significant falls in the prevalence of smoking in the UK, prevent many deaths and episodes of serious illness, and help to reduce the social inequalities in health that tobacco smoking currently exacerbates.”

Meanwhile, the American Council on Science and Health said “Tobacco firms already control 99 percent of the nicotine supply, and the firms could soon dominate the growing e-cigarette market. Unless constrained by the laws of the country concerned, tobacco firms could raise electronic cigarettes prices and their profit, decreasing the incentive for smokers to switch to safer products, and protecting firms’ tobacco cigarette sales revenue from competition.”

The Action on Smoking and Health in the United Kingdom also stated “Electronic cigarettes are proving more attractive to smokers than NRT, while providing them with a safer alternative to cigarettes. There is evidence that they can be effective in helping smokers quit, and little evidence that they are being used by never smokers.”

9. E-Liquids Have No Public Health Issues

Vapor produces zero second-hand smoke. Vaping and e-cigarettes are 100% smoke free. This means vapers have no health impact on society and this habit is not dangerous to those around.

A study by the Oxford Journal found that secondhand vapor even with nicotine lack combustible toxins.

Another study done by a team of French researchers found that on average vapor dissipates within 11 seconds, while cigarette smoke on average lingers for about 20 mins.

8. E-Cigarettes Will Not Stiffen Your Arteries

A study from the Onassis Cardiac Surgery Center found that electronic cigarettes made no differences in the aorta, nor stiffen the arteries. But with tobacco cigarettes, just 2 sticks of them will start the stiffening of the aorta.

7. E-Cigs and the Health of Your Heart

While The International Journal of Environmental Research and Public Health composed a study regarding the impact of e-liquids on heart’s cells and concluded e-liquids had zero effects on cardiac cells.

6. E-Cigarettes Do Not Impact Your Lung Health

Another research team from The Taylor & Francis Group did a study on the impact of e-cigs, primarily the e-liquid and vapor effects on the lungs. Their study concluded that e-cigarettes do not cause any acute respiratory disorders. They also found that secondhand smoke from tobacco was more harmful than first-hand e-cigarette vapor exposure.

Vaporization then is a safer alternative to smoking. Why? Because it involves heating dry herbs, or wax extracts to a degree that effectively releases the vapors containing medicinal properties only and without the harmful by products of combustion or toxins.

5. The Regulation of E-Cigarettes & Vaporizers Could Be Deadly

Dr. Gilbert Ross the executive medical director at the American Council on Science and Health did a study that concluded e-cigarettes are much healthier than combustible tobacco cigarettes. He stated that it takes only common sense to see this and regulation of e-cigarettes (vaporizers) could be a fatal decision for public health. 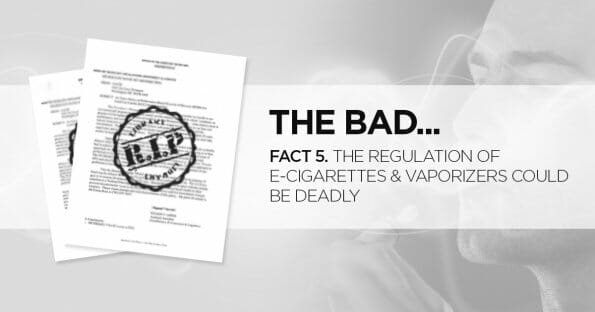 In a recent BBC article, Senator David Leyonhjelm listed the restriction on e-cigarettes as an example of ‘nannystatism”. This is to refer that the state is trying to make decisions excessively for its citizens on personal matters.

Senator Leyonhjelm argues that “Australian public health lobby has become too powerful and is pressuring the government to introduce unnecessary laws.” Unfortunately, based on Dr Gilbert Ross’ study, it could do the exact opposite of protecting their health.

4. Vapers Can Make Their Own E-Liquid

All ingredients used in e-liquids can be purchased in many common stores such as natural foods or bulk barns. Vapers can and some have been successfully creating e-liquid blends to suit their needs.

How to Make Your Own E-Liquid:

E-liquids that are High in P.G. (propylene glycol) create a stronger throat hit and holds flavour well. However, high amounts of P.G. over a long time may cause slight throat irritation in some vapers.

Another type of E-liquids are high in V.G. (vegetable glycerin). This create a thicker vapor cloud while tending to be soothing on the throat, but does not hold flavour well as P.G.

Making your own base is entirely up to your specific preferences, however common ratios are:

Adding flavouring is best at 10% ratio. For example if you want to make a 30ml bottle of e-liquid you would use 3 ml of flavouring for that bottle.

Warning: VapeFuse does not endorse the use of the nicotine or tobacco.

Since the toxic effects of tobacco is not present in e-liquid, its side effects are greatly decreased. In fact some studies are suggesting that it may actually be beneficial when your lungs are irritated.

How could it be potentially beneficial? Propylene Glycol is an ingredients in E-liquid and is already used in lung and throat sprays, and a recent study using mice shows great potential for fighting bacteria and viruses.

A  study regarding the mortality risk of both electronic and tobacco cigarettes done by Boston University School of Public Health concluded “The evidence reviewed in the article suggest that electronic cigarettes are a much safer alternative to tobacco cigarettes. They are likely to improve upon the efficacy of traditional pharmacotherapy for smoking cessation.”

Over the course of the 20th century, tobacco caused 100 million deaths and in 2004 second-hand smoke contributed to 600,000 deaths.

There has been Zero deaths related to the vaporizing of e-liquids or dry herbs that are not tobacco. This despite a mildly popular facebook post that claimed to have caused the death of a 65 year old. The said post was investigated by numerous investigative journalists and was found to be false.

2. There Are No Secrets When it Comes to the Ingredients of E-Liquids

There is a standard three (3) ingredients in e-liquid. It becomes four (4)  if the vaper chooses one something that contains nicotine. The three (3) main ingredients are propylene glycol, vegetable glycerine, and flavouring. These ingredients are used in hundreds of everyday products from food to drinks, medications, and even body products.

Research teams from both the University of Geneva and the University of Auckland joined forces to study the impact of electronic cigarettes on former smokers. They concluded that e-cigs can effectively provide a way to quit smoking and prevent relapsing into the bad habit again.

The British Medical Journal published a study about quit rates and support in England between 2006 and 2015.
Such study indicates that vaping has not contributed to the number of people trying to give up cigarettes. However the ones that do have the intent and switch from smoking to vaping are succeeding more than the ones that are not.

According to the BBC, authors of the BMJ study, vaping may have contributed to an extra 18,000 people quitting smoking in 2015 alone. This is very encouraging indeed and one expert was quoted by BBC saying vaping was a “major contributor” to quitting.

Vaping is the Future

Herbal medicine has been around for 60,000 years and with 5000 years of documentation it’s never been easier for people to practice therapeutic vaping. With the amazing, never ending choices of dry herbs or e-liquids there is really no excuses for smoking anymore.